VAT Newsletter 46/2018
With a further ruling, the Federal Fiscal Court has clarified its case law on the transfer of a going concern. In the disputed case, only the inventory was sold. The business premises were not included. The Federal Fiscal Court was required to deal with the question of whether the isolated sale of the inventory constituted the transfer of a going concern, and was therefore outside the scope of VAT.
1 Background
The transfer of a going concern (TOGC) is a dangerous provision in the VAT law. Although such a transaction is not taxable, problems can quickly arise if the associated VAT issues are misjudged. For instance, if the seller erroneously assumes the TOGC, he will be required to pay VAT with interest on the proceeds of sale. If, on the other hand, a TOGC is mistakenly not recognized and is invoiced with VAT, the purchaser will not be entitled to input VAT deduction. The repayment of the input VAT will also give rise to an unpleasant payment of interest. And that’s not all. With the TOGC, the so-called “footprint theory” applies, according to which the purchaser assumes the risk of adjustments of deductions in accordance with sec 15a of the German VAT Act (Art. 184 EU VAT Directive). In practice, TOGC are therefore always about the distribution of VAT risks which the parties involved often try to counter with tax clauses.
2 Federal Fiscal Court decision of 29.08.2018, XI R 37/17
In the dispute, the TOGC was, unfortunately not recognized by the parties involved. The seller invoiced the purchaser for the sale of his catering business showing VAT. The tax office subsequently denied the purchaser the right to deduct input VAT. The Federal Fiscal Court decided that it was right to do so. The special issue in the case was that only the inventory of the business was sold. The business premises were not transferred to the purchaser but were merely rented by him from a third party.

Thus, the question was whether or not it is harmful to the application of the TOGC principles that the business premises were not transferred and that, as a result, the purchaser was required to conclude his own rental agreement with a (third party) landlord. In other words, the case dealt with the following question: Is the transferred inventory a going concern?

In the Federal Fiscal Court’s opinion, this was the case. The national provision (sec 1 para a of the German VAT Act) is to be interpreted in conformity with Art. 19 of the EU VAT Directive. The decisive factor is whether the purchaser can continue the independent economic activity with the transferred assets. It is irrelevant that the purchaser concluded a separate rental agreement with a landlord. The Federal Fiscal Court refers to the important ECJ case law in the legal case Schriever. According to this, the question of whether the transferred going concern must include both movable and immovable property, is to be evaluated in view of the nature of the economic activity. In the disputed case, the business premises were inseparably linked to the inventory. Therefore, the immovable assets should also have been transferred. However, the Federal Fiscal Court makes an exception to this rule: It is sufficient if the business premises are made available to the purchaser, either by means of a rental agreement or if the purchaser himself owned a “suitable” alternate property. The latter – and this is new – can also be affirmed if the purchaser only has possession of the property on the basis of a separate rental agreement.

3 Consequences
The (isolated) transfer of inventory may also constitute a TOGC. The transaction is then not taxable. Any VAT shown must not be deducted as input VAT according to sec 14c of the German VAT Act.

As regards the assumption that the business will be continued, in terms of the TOGC, the purchaser’s acquisition of individual items from third parties is irrelevant. It is, however, important that, from the acquirer’s perspective, the transferred items are sufficient for the continuation of the business. In practice, this results in the following testing scheme: 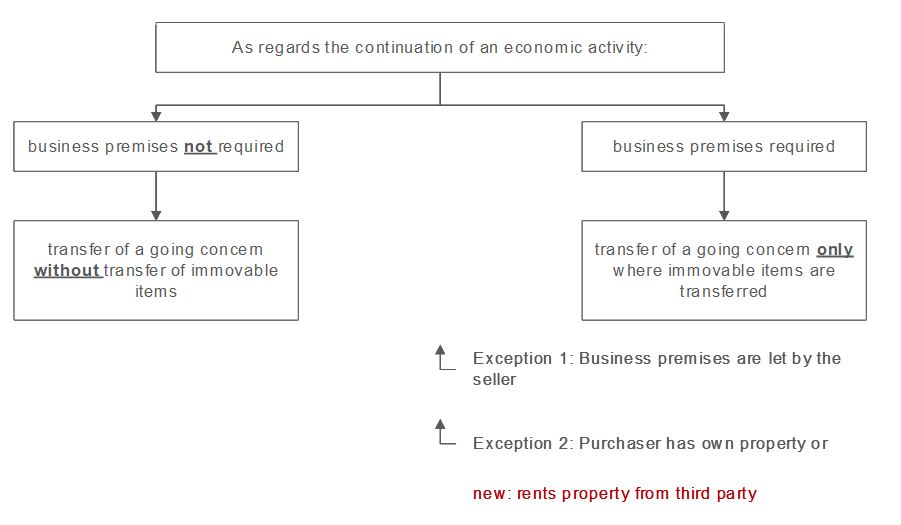