Where there is something to take, the gloves come off. No wonder VAT has increasingly become the focus of criminal tax law in recent years. The number of criminal proceedings and the imposition of fines have increased significantly, as have the number of raids and even arrests in this field of law. Unfortunately, it is not only intentional tax evaders who are at risk of attracting the attention of the authorities but honest, law abiding entrepreneurs and CEOs may also suddenly find themselves subject to investigation. In such situations, the full force of the state, in the form of tax authorities, tax investigators and public prosecutors, can hit you hard, often totally unexpectedly. And if this happens, even the toughest boxer is usually brought to his knees.

The matter of how to handle the correction of faulty tax returns from the past has also become a highly competitive field. The underlying facts are very complex, especially in a business context. This also applies to requirements which have to be taken into account in the course of a correction. Unfortunately, even in these cases, the tax authorities do not hesitate to initiate proceedings against the people responsible. In order to avoid this outcome, it is very important to consider the following points when correcting prior mistakes:

KMLZ has more than 10 years of experience in this field. Our VAT expertise is an important component in dealing with corrections on a purely tax basis.

We don’t want to paint too black a picture. However, if you ever feel that your back is (or might be) against the wall, you can rely on us to help. We will be there to offer our assistance in such difficult and unpredictable situations: quickly and efficiently.

We can support and advise your company and other representatives in the following areas:

Our approach to consultation and criminal defence is oriented towards the particular features of VAT criminal law:

Criminal tax law occupies a difficult grey area between tax law and criminal law. In order to mount an efficient criminal defence, a profound knowledge of the substantive and procedural tax law regulations, as well as criminal law is essential. There is no general answer to the question of whether the criminal defence in a particular case should be pursued primarily based on tax law, criminal law or with a simultaneous focus on both. This decision has to be made depending on the circumstances. However, in most cases, tax law provides the most promising approach. This is due to the fact that, if it is possible to disprove that the conditions of tax law regulations have been fulfilled, allegations made by the tax and investigating authorities – as for example allegations of deliberate tax fraud or reckless tax evasion – can be more easily rebutted. Thus, the possible initiation of criminal or fine proceedings can be made unlawful in terms of tax law, without having to delve into consideration of mens rea (intent, recklessness or negligence), which is always problematic.

On top of this is the field of law concerning VAT, a very complex area, which is subject to constant amendment resulting from ever changing European legal specifications. These constant changes have to be borne in mind and made use of in all criminal tax proceedings. Our acknowledged expertise in VAT law, linked with our vast experience in criminal tax preliminary proceedings and a legal team which includes a former leading tax authority employee, specialising in tax and fine investigations, means that we have all of the necessary ingredients to mount an optimal defence. The “interfaces” between VAT law and criminal tax law are diverse: Problems regularly result from exports and intra-Community supplies. Tax authority doubt concerning an entrepreneur’s good faith, in terms of VAT deductions submitted, can rapidly result in the initiation of criminal tax proceedings. Even an accusation of participation in a fraudulent VAT carousel may be made. In many cases, these accusations are levelled at honest and law abiding entrepreneurs, who have properly complied with all of their commercial due diligence obligations. In such cases, an extreme situation may arise which can impact on an entrepreneur, not only personally, but also in such a way as to threaten the very existence of his/her business. 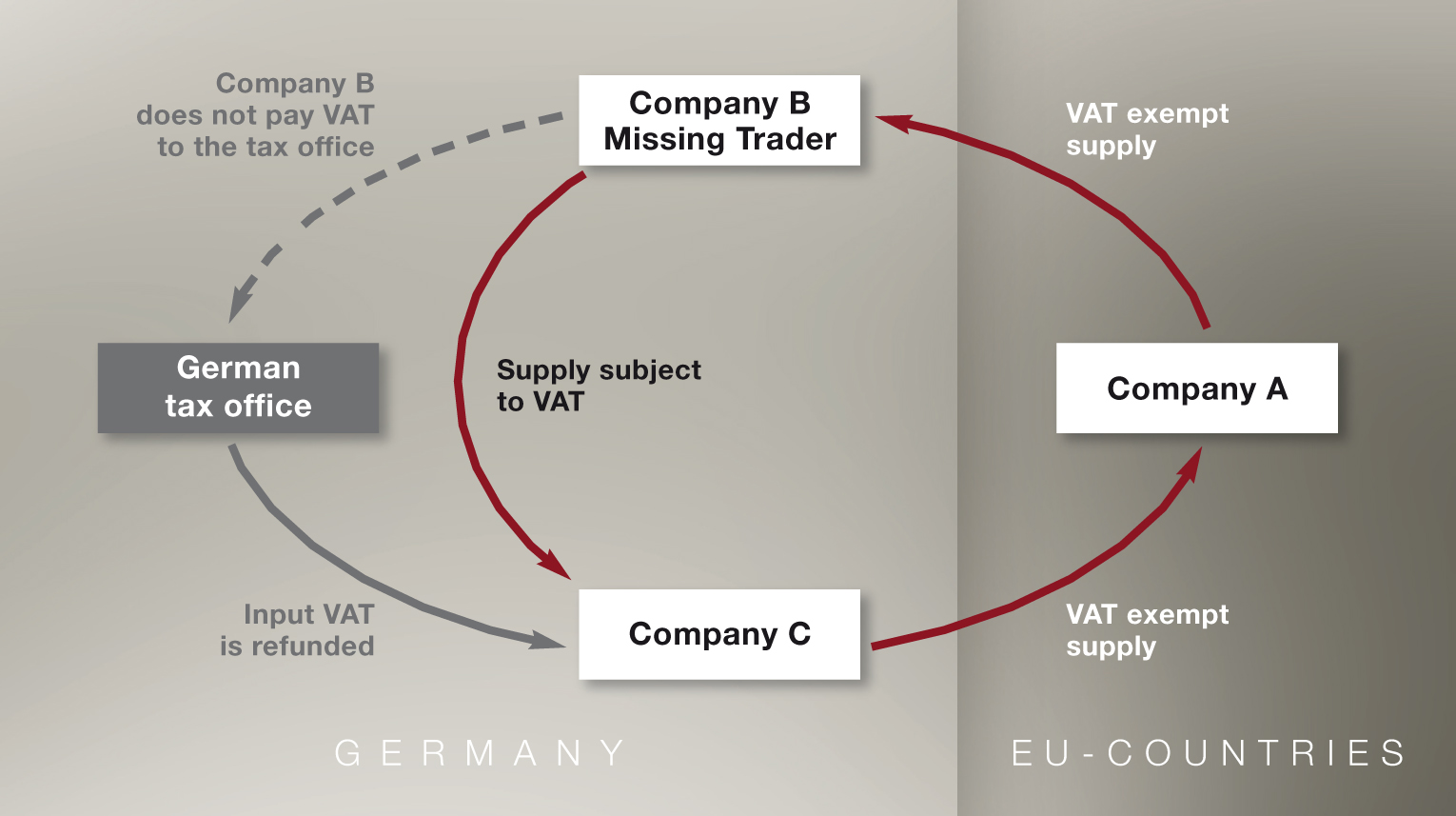 As the German Federal Court of Justice has tightened its jurisprudence, the doctrine of “legal certainty in respect of tax criminal law”, which existed in earlier times, has lost its balance. For instance, with its judgment of 08.09.2011 (1 StR 38/11), the German Federal Court of Justice stated that the conditions for being accused of conditional intent are very likely to be met. Furthermore, it stated that every taxable person is required to sufficiently inform themselves about all of the tax obligations that they need to comply with; otherwise, conditional intent might be assumed.

In the circumstances, criminal tax law risks in the field of VAT have increased significantly in recent years. There is a clear tendency towards the expansion of criminal liability and the more severe punishment of tax offences. Where taxes in excess of EUR 50,000 are at stake, it is usually not a “simple” fine, which will be imposed, but rather a term of imprisonment, albeit possibly a suspended sentence. If tax in an amount exceeding EUR 1 million is the subject of the investigation, the offender will have to face the reality of being imprisoned – possibly suspended – if convicted. And you know as well as we do: These sums can quickly be reached in the world of VAT.

Self-disclosure in order to avoid fines is restricted

In 2011, the legislator partly adopted the restrictive jurisprudence of the German Federal Court of Justice, implementing it in the Illegal Earnings Combat Act. Since this time, self-disclosures can only be made if very strict requirements are satisfied. In 2015, the legislator introduced further tightening to legislation. If tax in an amount exceeding EUR 25,000 has been evaded, there is only one way of avoiding sanctions: the taxable person must pay an amount of 10-20% of the sum evaded, (the higher the amount of tax evaded, the higher the percentage), in addition to the subsequent payment of the tax and interest the taxpayer has evaded in his/her favour. On top of this, the self-disclosure is required to contain full tax details of the previous ten calendar years.